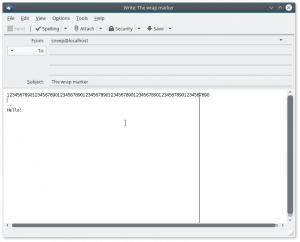 The code is up on GitHub.

This Thunderbird extension adds a word wrap marker (also called “ruler”, depending on what editor you’re using) to the text area in the compose window when you’re editing plain text emails. In effect, a vertical line indicating that you’re close to the 72/76/80-character mark. (You can change the position in about:config. The default is 76.)

It works by changing the entire editor’s (think “iframe”) designMode from “on” to “off”, and adding a div with contenteditable=”true” instead. If this changes how your compose text area behaves, I’d consider that a bug, so please let me know.

At the time of this writing (February 26, 2018), this extension is still kind of beta and not exactly “thoroughly tested”. It will be submitted to Thunderbird’s extension page once it’s been tested some more and maybe once it’s gotten some of the known bugs fixed. These include: